Since the number of guests who are interested to explore the waterfalls near Split Croatia has been ever increasing, we bring you the full list of the natural wonders you can explore nearby the city. 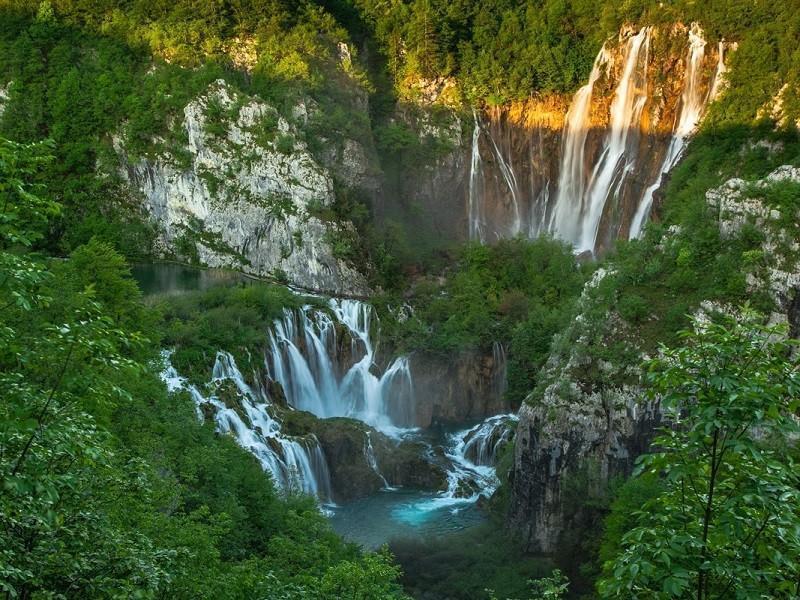 The highest waterfall in Croatia is located in the National Park Plitvice lakes. The Large (Great) Waterfall (Veliki slap in Croatian language) is 78 meters high and is situated at the end of the Lower Lakes.

It is fed by waters of river Plitvica Potok. Considered as the most beautiful one on the Lakes, and for many the most attractive among all waterfalls near Split Croatia.

What is special about this waterfall in comparison with others in the national park is that while all the other Plitvice falls are formed by spilling of waters from upper to lower lake,  the Great waterfall however was actually formed by the Plitvica Potok river which extends tree kilometres to the west of the fall.

If you are interested to visit this amazing peace of nature you are welcome to join us on the Plitvice lakes tour from Split. 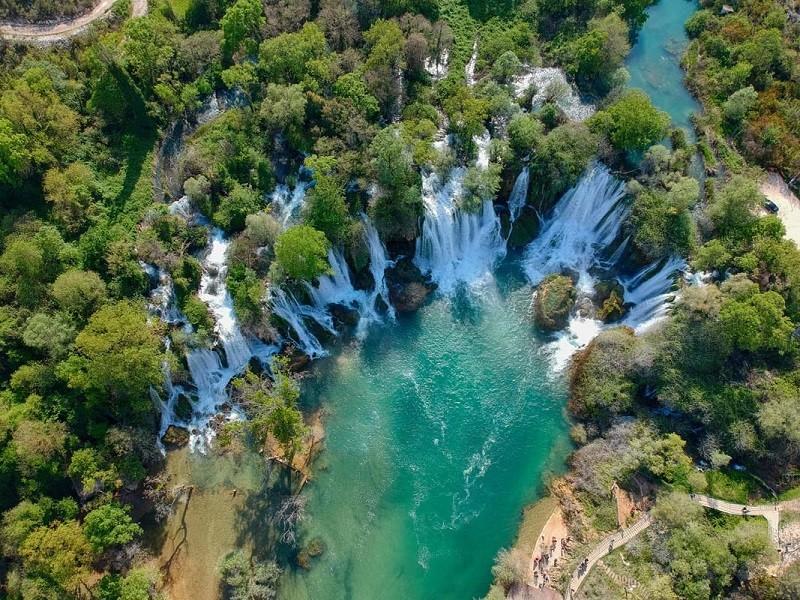 In the area of Ljubuski there is an amazing and unique natural beauty built by the water of the Trebizat river, passing through depositing tufa and limestone terrains. According to many visitors, praised as one of the most attractive natural beauties, the Kravica fall is an authentic symbol of Bosnia and Herzegovina and one of the waterfalls near Split Croatia which is well worth the visit.

Kravica Waterfall is a popular Herzegovinian picnic zone since in summer months, visitors are offered swimming and other water activities on the river.

Three kilometers downstream from the village of Hrašljani, between the villages of Zvirici and Studenci, the Trebizat river creates a waterfall twenty eight meters high and a beautiful natural amphitheatre 120 m wide.

Waterfalls near Split Croatia along the Krka river

Among several reasons why the Krka National Park is recognized as a must-see stop during exploration of cultural and natural values of Dalmatia, probably the most important is that river Krka on its course builds 7 amazing and picturesque waterfalls. 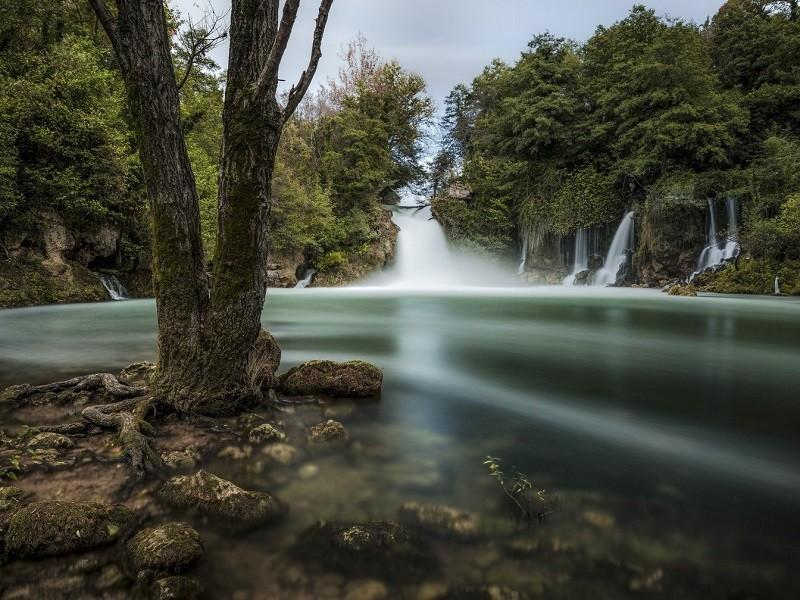 From source to Bilušića buk, the first of seven waterfalls, the river Krka runs for 16 kilometres in serpentine but calm manner penetrating the canyon of 60 to 200 meters wide.

The waterfall is very loud and appealing. It consists of two large and several smaller steps at the length of 300 m, with a total altitude difference of 22.4 m. The total width of the waterfall can come up to hundred  meters. Beyond nowadays watercourses, there can be seen an beautiful “dead tuff”.

Bilušića buk is surrounded by lush vegetation and following the flow of the Krka river there are abandoned mills, and small gardens both rolling and stamping. 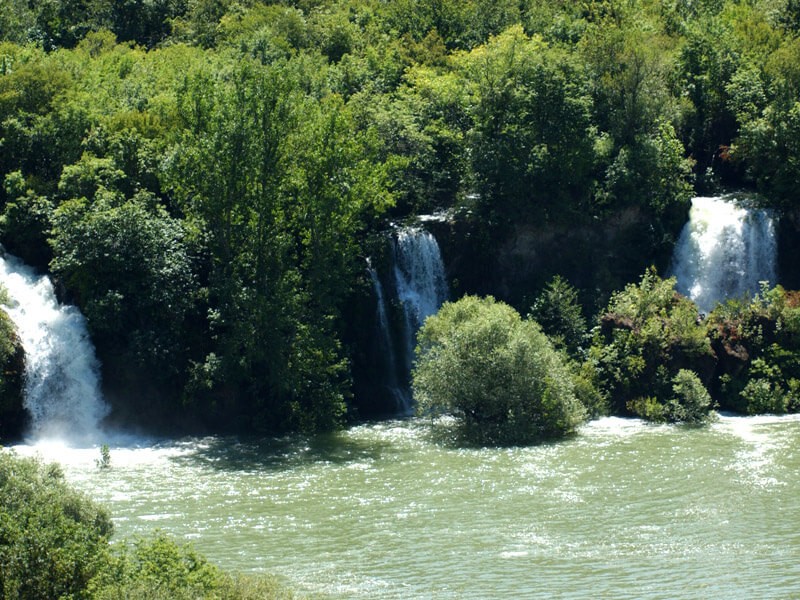 Two kilometres upstream from Bilušića buk at the exit of the canyon Krka expands to 400 m wide and 1,300 m long Coric Lake created by raising the barriers of travertine waterfall Brljan.

Water of the lake flows through a waterfall with over of 15.5 m in total height, because it is drained through a tunnel to the hydropower plant “Miljacka”. Lack of water in the summer, but on the other hand, very high levels of it in the winter, causes cracking and erosion of limestone waterfall making its future extremely uncertain.

There is a very old road crossing the falls since long time ago as evidenced by the remains of Roman military camp Burnum. Krka’s downstream on its way at a distance of about three kilometres form three waterfalls in the magnificent canyon: Manojlovački slap, slap Rošnjak and Miljacka waterfall. 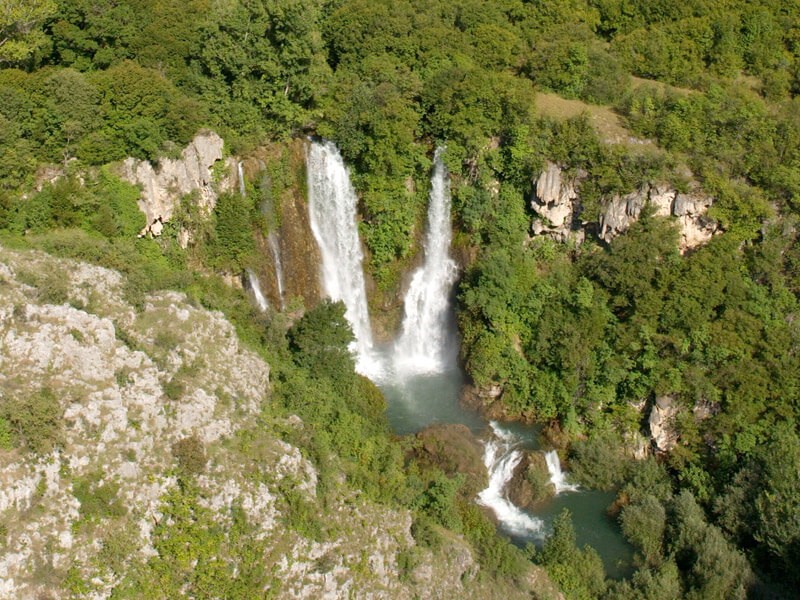 Manojlovački waterfall is the largest and the most beautiful waterfall on the river. It consists of a series of travertine barriers a total height of 59.6 meters with the main waterfall height of 32.2 m. Length of the waterfall is around 500 and its width is around 80 meters.

Among travertine formations on Manojlovac the most commonly represented are rills, caves and half-caves. Remains of numerous mills are visible at the foot of the falls. The waterfall is dry and lifeless for almost half a year, because its water is taken by reservoirs nearby hydroelectric power plant “Miljacka”.

With even colour of the rainbow, high waters fall into the depths with a deafening noise. Whoever sees all its exuberant beauty once, they will remember it as one of the most delightful natural beauties.

This site is truly amazing but unfortunately is not in any regular itinerary However, if you like to visit Manojlovački waterfall you can join us on the private tour from Split to Krka National park. 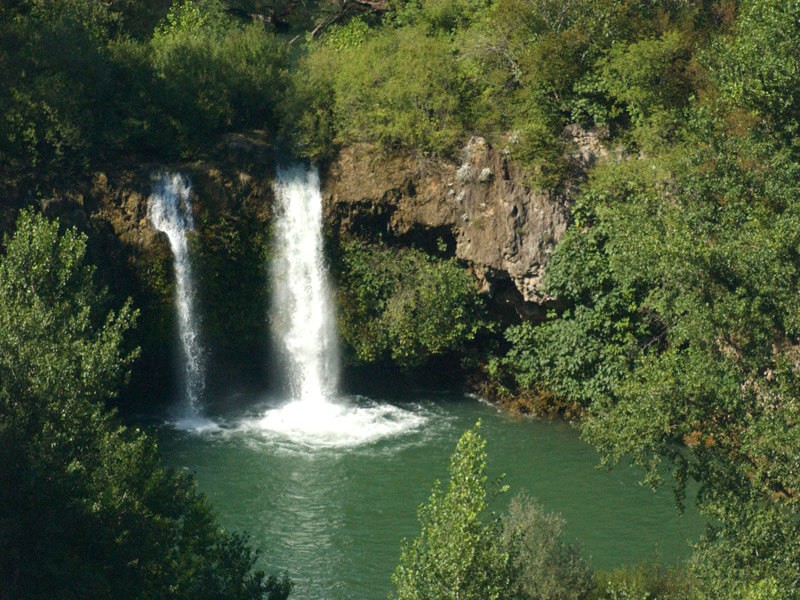 A mile downstream from Manojlovačkog waterfall in a narrow but almost two hundred meters deep canyon, hidden in untouched nature, there is Rošnjak, the lowest waterfall on the Krka. It consists of a stair approximately 40 meters wide and only 8.4 meters high.

It is the only waterfall on which mills never existed, due to the unavailability. Rošnjak, although intact by a human hand and only to be observed from a distance, is defiled by the lack of water which discharged to the hydroelectric power plant “Miljacka”.

The mystique of the scene and its unavailability reasons are why this single step waterfall is often called “the altar.” 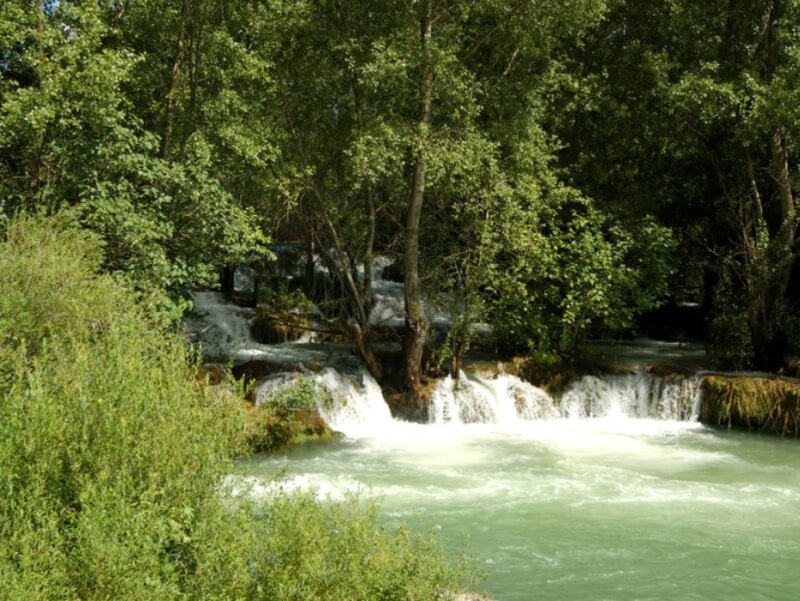 A mile downstream from Rošnjak is Miljacka waterfall. It consists of three large and many small steps with total height of 23.8 meters. The upper part of the waterfall Miijacka is characterized by rills and half-caves, and the lower by the low steps.

The waters of the river Krka are here joined by the waters of river Zrmanja. At the foot of the waterfall there are more collapsed mills and hydro power plant “Miljacka”.

Despite the hydro power plant disturbing the virgin beauty of the falls, it is still a boisterous and playful high waterfall. A hundred meters downstream on the right side of the river there is a cave Miljacka II. where many endemic and protected underground animal species live.

Downstream from Miljacka falls the river suddenly turns to the south, makes its way between steep canyon sides to the monastery Krka or St Archangel, where it expands to form a peaceful river valley. 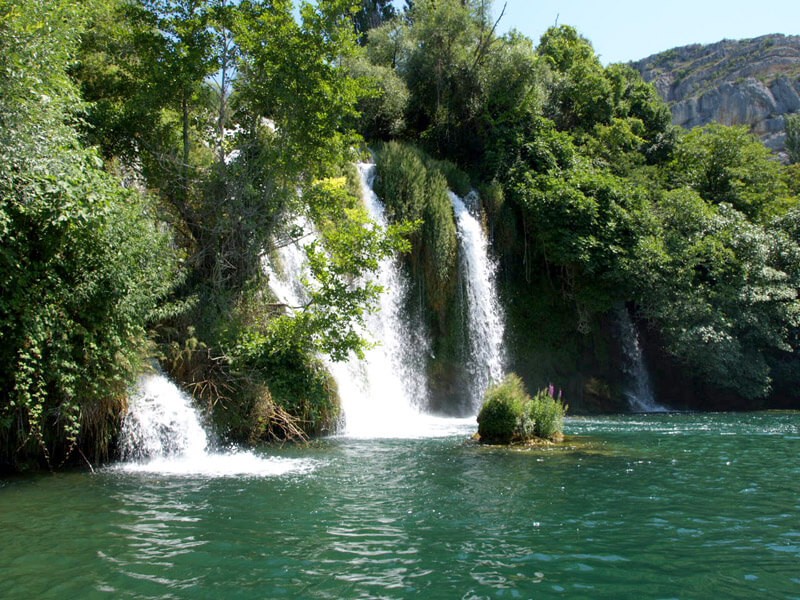 Leaving the valley, Krka continues on its way through the steep canyon to Roski waterfall which is named after the gardens Rog, whose traces today are not visible. Start of the barrier consists of a series of small cascades (popularly called the ‘Necklace’), and the centre is made up of backwaters and isles. In this part the canyon widens to form a funnel. The maximum width of the barrier is 450 meters, the length of around 650 meters, and the total height difference is 25.5 m. The main waterfall is at the end of the barrier where the river Krka crashes into Lake Visovac in a wide range of 15 meters.

On the right bank a rapid hydroelectric power plant “Roski slap” was constructed in 1910. Over the waterfall there is a road, which has linked river banks since Roman times. At the waterfall there are numerous renovated, and in its original form kept mills, pillars and rolling mills for washing cloth. The mills have a cultural and historical significance as monuments of rural architecture and economic history, and given their primary activity and the popular name, they are considered the ethnological and ethnographic monument as well.

Roski waterfall is extremely interesting to visitors for the richness of plant species on the merge of warm and dry, but humid and shady places. A mile downstream the river enters a short canyon called “among the beams”. On the way out of the canyon there is Visovačko Lake, the largest expansion of the river Krka which is connected to the sunken delta of river Čikola and Skradinski buk. 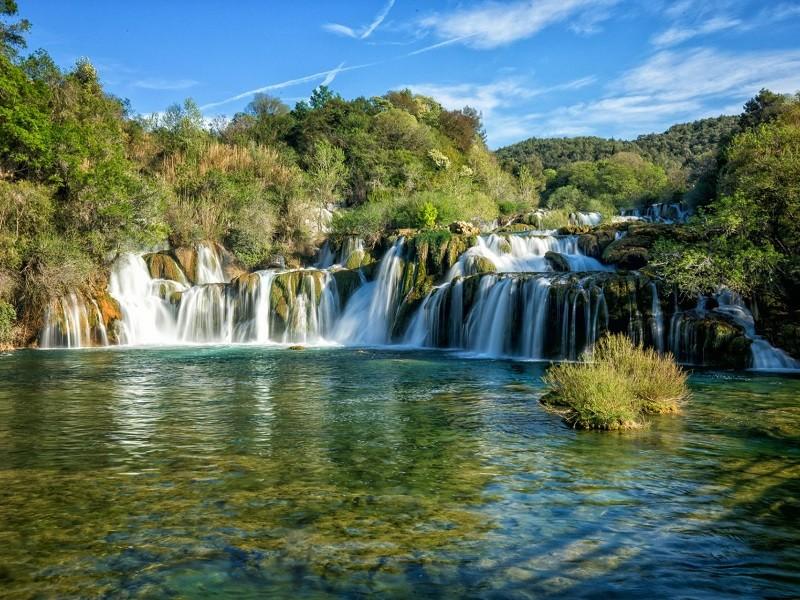 Skradinski Buk is the last of the seven and the longest travertine barrier on the Krka River and is probably the most attractive among the waterfalls near Split Croatia. The growth of travertine barriers caused a pool of water of the river Krka to form before turning into Roski waterfall and three kilometres of downstream river Čikola, thus creating one of the most beautiful and unusual landscape scenery among all National parks near Split. Over seventeen steps of Skradinski buk waterfall, spread over eight meters in length, it is the last step after forty nine  kilometres of its journey towards the sea, common waters of Krka and Čikola rivers flow together.

The width of the Skradinski buk is 2 hundred to 4 hundred meters with a total height of 45.7 m. In order to fully enjoy the amazing nature a walking trail has been constructed around the waterfall. A tour of the track during just a one hour walk, shaded by lush vegetation, one can directly experience a unique microcosm of magical sounds, lights and colours.

Besides the fact that the waterfall is the richest in water and the most famous on the Krka river, it is a place for observing aquatic habitats, travertine barriers and plant species. A careful observer will see trouts swimming, fast-moving snakes, singing of nightingales, diving of fish, sounds of colourful frogs or playful flight of dragonflies and butterflies. Along the course of the trail there are many water mills which for many centuries used the power of the water flow.

Most of the water mills were renewed to their original function, and inside them the noise of a millstone can be heard again. Some mills are restored and arranged, in accordance with the traditional architectural values, into souvenir shops and interesting exhibition spaces in which are exposed thematic ethnographic collections of many useful items. The exhibits represent the work, customs and life of the people along the banks of the river Krka in a colourful and distinctive way.

In conclusion we can add that even though the narration was long and wide, it cannot even approximately evoke the beauty and mystery of nature that surround the area around Split city. Therefore, we recommend that you visit as many as possible waterfalls near Split Croatia during your stay in our beautiful country. 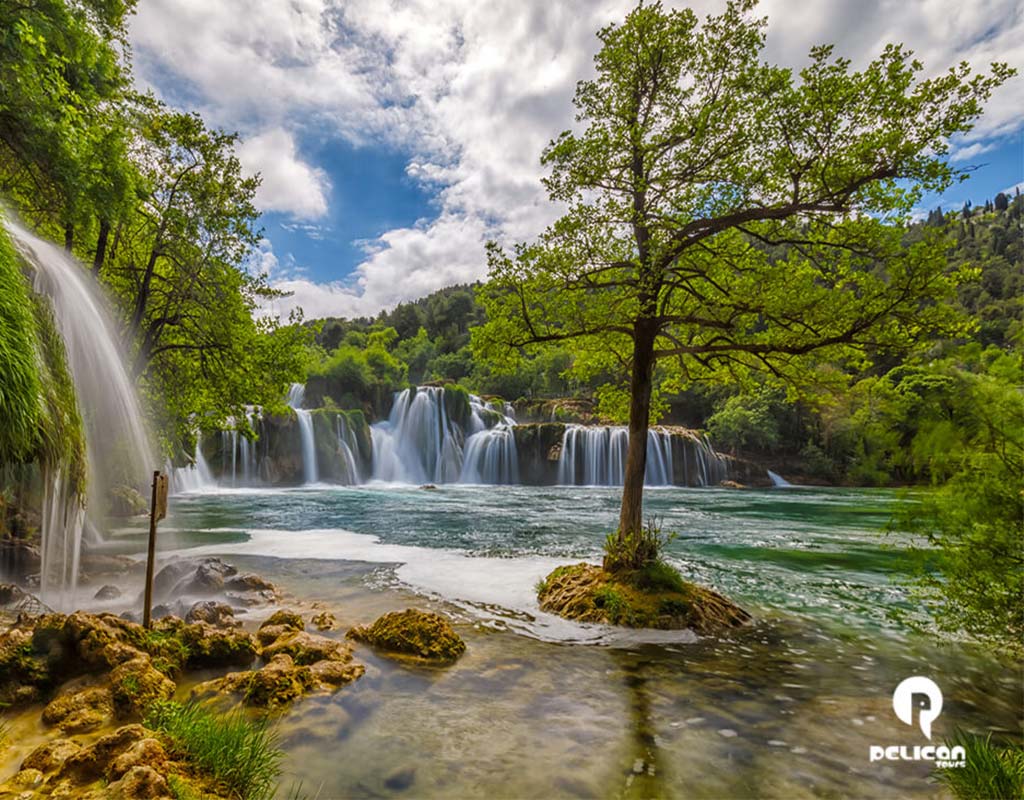 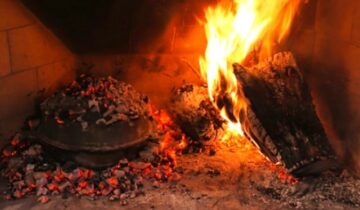 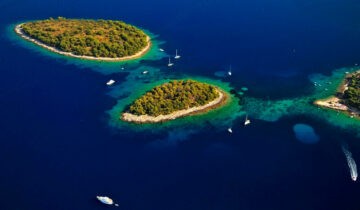 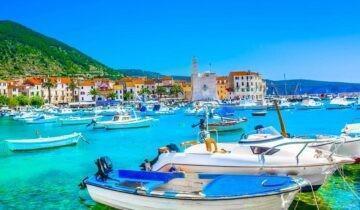