Wouldn’t it be a fantastic experience to go sightseeing in a Hot Air Balloon in Split Croatia?

Although we admit that this is most certainly a subjective opinion, locals will unanimously declare that Split is “najlipsi grad na svitu” (the most beautiful city in the world).

When we take into consideration the beautiful slopes of the mountains that protect the city from the northern winds, the almost perfect climate conditions, pure air and crystal clear sea, the proximity of a green oasis – Marjan and a palace protected by UNESCO, which tells a story of nearly 2,000 years of urban continuity, we must admit that there are plenty of arguments in favor of such an attitude.

We ourselves have many times thought, would not it be perfect to observe this harmonious set of natural and cultural beauty from way above?

A dream of an affordable sightseeing of Split in a hot air balloon!

Although I have been many times accused of loving to daydream, with such comments like “he lives in the clouds”, I have always accepted it as a form of compliment. In my opinion there are only a few situations in life where you should not be humble, when you give, when you love and when you dream.

One of the prerequisites for a happy life is to always, at least to some extent, stay childish. When we look at the children as they play, we can see that with those of pieces of wood or other materials, to us just worthless objects, they can create a show in which they will find more joy than we adults have the opportunity in our real world. They have this possibility because of their unrestricted freedom of imagination.

After all, has the imagination not enabled various dreamers in the past to become visionaries and truly go beyond the limits of previously though possible?

Inspired by this way of thinking, as I analyzed the tourist offer of the city of Split, I noticed that everyone is looking for ways to devise a better trip than those classic at the sea and on land. Hey, while everyone is focused on sea and land excursions, no one seems to be looking above. Undoubtedly the sky offers great opportunities in the form of entertainment and pleasure. After some reflection time, the decision has been made. The most interesting offer in the city will definitely be “Hot Air Balloon in Split Croatia”!

Although I knew the most important question about this is whether such a flight will be safe in an area between the mountains and the Brac channel, where many currents collide, I let the answer to this to wait, in order to resolve all the other possible complications. As for the equipment, I wanted only the most modern and highest quality, so the selection was relatively simple.

There is only are few top manufacturers of hot air balloons and additional equipment in Europe. In our opinion, the most complete service in this segment is offered by Cameron Balloons. In addition to their high-performance products, the company offers experienced pilots for hire, but also performs pilot training.

The goal from the very start was that such a panoramic flight needs to be relatively inexpensive (approx. 30 euros for a 45 minute flight). In order to offer such a low price it was necessary to obtain a balloon with a cart that can accommodate 18-24 people. This is certainly the most expensive equipment on the market, but the real problem was to solve the financial structure for such an endeavor.

Apart from hiring the pilot, providing the envelope, basket, burner, storage equipment, bottles with helium, the vehicle in which the equipment is transported to the place of departure, the problem was a large the number of permits required to perform such an activity altogether.

So how will a small family agency accomplish such a demanding financial plan?

As I understood, I would have to buy everything except the envelope, which is the most expensive piece of equipment. Prior to that, I will find a sponsor whose logo will appear on the envelope. After some calculations and projections, it was clearly evident that the number of companies that would want such an advertisement made a lengthy list. In addition to that, the sponsor would cover all the costs of the project and still be very satisfied.

When we take into account the possibility of grants from the EU that fund good projects, especially if they create additional value and new products, a period of enthusiastic mood was not a surprise. Let us not forget the 18 x 30 euro profit that could be achieved a few times a day in favorable conditions.

However, as generally in life and especially in business, decisions must be made with a “cool head” and no room for further daydreaming.

In the end the time has come to answer the crucial question. Is such a trip possible due to the micro climate?
Unfortunately, the answer was negative, which is also very likely the reason why offer “Hot Air Balloon in Split Croatia” does not exist in Split, as well as nowhere else in Dalmatia.

Safe balloon flights are performed at wind speed of 2-3 knots. Anything higher than 5 does not make ideal conditions. Knowing that winds in Split area can easily reach the speed of 9-13 knots, the situation is far more complicated than what we could have hoped for.

In addition, were any problems to occur during the flight, the pilot must have a possibility to land at the first alternative location, and Brac channel and the sea in general are not a safe place for an emergency landing. ?

This is why such service is usually offered in lowland areas.

In case you still fantasize about balloon flight in Croatia, we advise you to head to Zagreb where we can refer you to our friends in “Balloon Club Zagreb”, which have professional pilots from the national team in their ranks, and they are the only absolutely prepared company to give you such an experience in a safe manner.

However, it’s not all bad news for us who want to observe the area of central Dalmatia from the bird’s eye perspective. In fact, ever since last year there is an alternative to a Hot Air Balloon in Split Croatia.

This is the first aerial service of such kind in Split, and it is performed by hydro-jets of high-class directly from a ferry terminal, so your dreams can be partially achieved, since their prices have made flying affordable even to customers with lower purchasing power.

Whether you decided to enjoy the beauty of Split and Dalmatia from the air or in some other, more common way, visiting the national park from Split or the islands around Split, we wish you a very warm welcome you and to enjoy your vacation here! 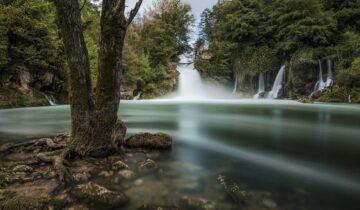 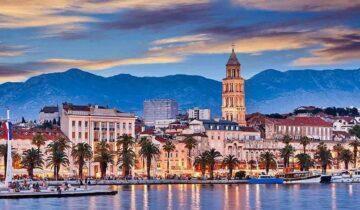 Places To Visit From Split Croatia 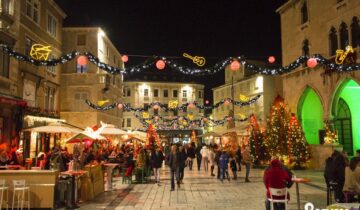